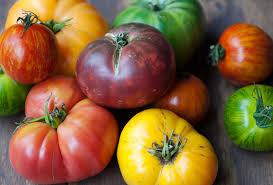 We hate to be the ones to tell you this, but if you’ve never had an heirloom tomato then you’ve never tasted a real tomato.

A tomato is considered to be an heirloom when the seed has been saved and grown at least 50 years or more and has been passed down from generation to generation. An heirloom is also open-pollinated, which simply means the plant is capable of producing seeds that will grow a new plant identical to the parent plant the seed came from. Heirloom tomatoes are often grown for their taste, which is widely perceived to be better than modern tomatoes. They do, however, have a shorter shelf life and are less disease resistant than most hybrid tomatoes.

Brandywine Red is one of the most popular and, in my opinion, the best-tasting heirloom tomato! The vigorous plants bear large-lobed, beefsteak-shaped fruit that are perfect for slicing. The thin-skinned, pinkish-red tomatoes are flavorful but not acidic. If you haven’t tried one, you should consider growing one this season.