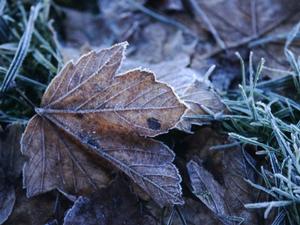 Ice crystals form at temperatures below 32°F, when water vapor condenses out of the air and settles on a cool surface, such as your garden beds or garden plants. Frost is just a frozen form of dew, and it damages plants by freezing the water inside the plant cells, which then burst and die.

A light frost can occur at 30-32°F. There’s a touch of white on the ground, but it’s short-lived; as soon as the sun hits it, it’s gone, and all but the most frost-sensitive plants will survive. At lower temperatures, a killing frost can occur, and you can pretty much say good-bye to most of your annual flowers and most vegetables.

Crops differ in their susceptibility to frost, and there are steps you can take to extend the season. These maneuvers are worthwhile, because typically a frost is followed by some warm, sunny weather before things really chill down for good.

If a light frost is predicted, I cover my frost-sensitive crops with assorted bed sheets and light blankets (never use plastic) and hope for the best. The next morning, anticipating rising temperatures, I remove the coverings.

If you don’t cover your plants and frost hits them, you can sometimes save them by hosing off the frost early in the morning before the sun hits them.

What to harvest when…

If you’re like me, you’ll want to keep your garden going as long as you can. So you won’t want to put your garden to bed until it becomes absolutely necessary.

The measures described above work for a while, but at a certain point, enough is enough. Even if the plants are alive, they are no longer actively producing. When a hard frost is imminent, I bow to the inevitable. I harvest all remaining tomatoes (ripe or not), cucumbers, hot peppers, sweet peppers, eggplant, beans, and basil, along with any frost-sensitive flowers I’d like to enjoy a bit longer in a vase.

No need to harvest the winter squash and pumpkins yet, as these survive just fine in the field even if the vines die. Leeks, scallions, beets, and carrots are in no danger from frost either, and members of the cabbage family—brussels sprouts, broccoli, and kale—actually improve in flavor with frost.

The Farmer’s Almanac indicates that the average killing frost date for our area is October 11th but that info won’t help with anticipating light frosts so it pays to keep an eye on nighttime temperatures.