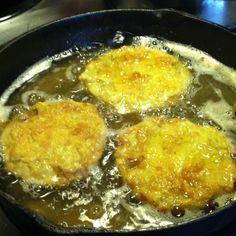 Even though the 1991 chick flick with the same name leads us to believe that Fried Green Tomatoes originated in the south, the history of this “either love ’em or hate ’em”  side dish is forever one of my favorites.  Matter of fact, it would be something I would request as part of my last meal.

It seems this delicious dish did not originate in the south! According to food historian and writer, Robert Moss, it appears that fried green tomatoes originated in the Northeast and Midwest with even a possible link to Jewish immigrants. It does makes sense that it more likely originated in areas where the growing season was shorter, hence people had to find a way to use all these tomatoes that were not ripe before the frost took them out. No matter where they originated, they are delicious!

In a separate bowl, combine equal parts jiffy corn bread mix and flour.  I usually use about ½ the box and as much flour per batch.   Set up assembly line next to stove.  Dip sliced tomatoes in egg mixture, then dredge into flour mixture, pressing coating into tomato.  Fry on medium heat in hot olive oil, or butter, or combination of both.  Drain on paper towels, salt and pepper.

My secret:  Some things just taste better cooked in cast iron skillet and this is one of those things.

Submitted by Sue Sarters. Sue works at Wenke Greenhouses and is an avid cook.