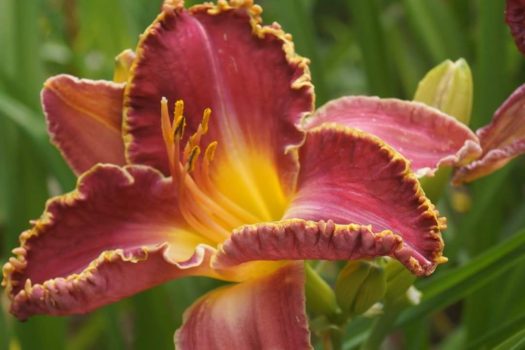 It’s Good for Your Plants

Dividing perennials is an easy, inexpensive, reliable way to propagate you favorite plants. In fact, lots of varieties of perennials benefit from division, resulting in several young, actively growing and blooming plants out of an overgrown clump. It’s a good idea to spend a little time before you start the task and decide where the divisions are going. Take advantage of the opportunity to amend the soil before you plant you divisions.

Can any perennial be divided?

Almost all varieties of perennials can be divided, but there are a few that resent being disturbed. Some deeply rooted perennials that don’t like to be disturbed, such as butterfly weed, Russian sage, baby’s breath and clematis vine.

How do I know which kind of root system my perennial has?

There are several basic types of root systems. Some perennials, such as iris, bergenia, Solomon seal, gypsophila, peonies and daylilies have rhizomes or tubers. Others have fibrous roots, such as rudbeckia and phlox. There are a few perennials with root systems that are almost woody, such as astilbe and hostas. A small number of perennials have a deep tap root, such as gas plant or butterfly weed.

Is there anything I should do before I start digging and dividing?

Your job will be much easier if you cut back all the foliage. If it hasn’t rained recently, water the plants a day or two before digging.

When should I divide?

Generally, you divide your plants when they are green and leafy, not while they are blooming. Some varieties are particular, preferring a certain time of year and others are flexible. A basic rule of thumb is that if it blooms early, divide late and if it blooms late, divide early. Dividing on a cool, cloudy day will help minimize any shock to the plant.

What tools will I need?

Successful division of perennials can be accomplished with your basic garden tools, such as shovels and spades. A hatchet, knife and scissors are helpful too. Be sure your tools are sharp and clean. Sharp tools do less damage to the root systems. Clean tools are less likely to transmit diseases.

How do I divide?

Depending on your needs, perennials can be divided into lots of small pieces that will take a while to reestablish or a few big pieces that will make nice plants that first season. First dig up the clump and clean it off so you can see the root system. All your perennials will have growing points that emerge through the soil. Be sure you leave at least 3 or 4 growing points in each division. Plants with fibrous root systems can simply be cut into pieces with a sharp tool and reset. For plants with rhizomes or tubers, use a sharp knife to cut the root system apart. For plants with hard, woody root systems, it may be necessary to use a hatchet or a very sharp spade.

Do I need to take the whole clump out of the ground?

Whenever possible, it is best to lift the whole clump from the ground so you can clearly see the root system.

How late in fall can I divide?

The later in the fall you divide your plants, the less time they will have to get settled in. If you need to divide late, you may want to mulch them heavily to keep the ground warm longer.

How long can the divisions stay out of the ground?

Ideally, you want to plant the division as soon as possible. If you can’t get them back into the soil right away, protect them from the sun and from drying out.

Do I need to do anything special when replanting divisions?

Take advantage of the opportunity to improve your soil before planting, and be sure to replant the divisions at the same level as they were growing originally.

Water the plants well once you have planted. If you are dividing during the growing season, try to choose a cloudy day. Provide light feedings throughout the growing season and mulch in fall. Remember fall mulching shouldn’t be done until the ground is near freezing (mid-Nov. in our area).