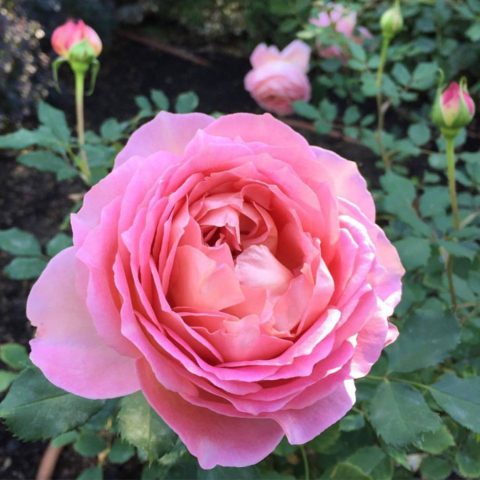 Have you ever wondered how roses get their names? The process of having a rose named is actually very simple. The real difficulty is in hybridizing a rose that’s worthy of naming!

A very popular older Hybrid tea, the ‘Peace’ rose was introduced right after the end of World War 2. It was actually sheer coincidence that Berlin fell and a truce was declared on the same day as the naming of the ‘Peace’ rose. In naming the rose, this simple statement was read: “We are persuaded that this greatest new rose of our time should be named for the world’s greatest desire: PEACE.” It is interesting to note that on May 8, 1945, when Germany signed its surrender, the 49 delegates who met to form the United Nations were each presented with a bloom of ‘Peace’ and a message of peace from the Secretary of the American Rose Society. ‘Peace’ also breathed new life into the gardening world, which sorely needed reviving after the war. The huge amount of publicity it received internationally made people excited about growing roses again.

Named after one of the finest Cathedrals in Britain, the ‘Winchester Cathedral’ is as grand and elegant as the name suggests. But many don’t realize it was an accidental rose, found when the ‘Mary’ rose was first introduced, as a white rose in the same group as the original pink ‘Mary’ rose.

One of my favorite roses is Lady Emma Hamilton. Before the flowers even begin to open, the outside of the buds are a most wonderful dark red with dashes of orange. When fully open, the flowers are a lovely mixture of rich, almost tangerine orange on the inside of the petals and a more yellow orange on the outside; the whole set off against the very dark, bronzy green leaves that only slowly become dark green with age. This rose gets its name from Admiral Lord Nelson’s mistress.

A very hardy rose is ‘William Baffin’, named after the Explorer who was involved in Canadian exploration. It’s hardy down to zone 2, and needs very little care. A wonderful yellow Floribunda is ‘Julia Child’, named after the well-known British culinary expert.

My favorite rose is ‘Double Delight’. This rose fulfills the two highest demands of a rose – an eye-catching color combo and a fantastic fragrance. Comments like ”breath-catching beauty”, ”most striking All American ever”, ”prolific bloomer”, ‘‘and excellent fragrance ‘‘, and ’’ spectacular flower color” tells the story. It’s been in the Gamble fragrance award list from the time of its introduction and it has a combination of deep red and cream color. It’s truly a double delight.

The last rose I would like to mention is ‘Darcey Bussell’. ‘Darcey Bussell’ is believed to be one of the best and most healthy red roses bred to date. Darcey Bussell is the highly acclaimed ballerina. She was appointed principal at the Royal Ballet at the age of 20 and has danced in the title role of many ballets around the world.