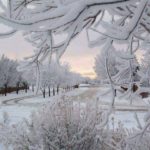 Though most of us think of the hazards related to accumulated snow fall, as gardeners we need to look at snow a little differently and somewhat positively. Snow cover, similar to the 24-40 plus inches we had in 2007 provided benefits to our soil, plants and shrubs.

Primarily, snow cover acts as an excellent insulator of the soil. Snow cover helps keep the soil from freezing deeper and deeper thus preventing root damage. Second, with enough snow to cover small evergreen and non-deciduous shrubs such as rhododendrons, snow helps lessen the impact of desiccation (loss of water) in plants.

“We have to remember that plants use moisture to protect themselves against winter winds and cold temperatures. The more moisture loss that is prevented, the greater the ability of plants to survive the winter,” explains Linda Whitlock, Kalamazoo County Cooperative Extension Consumer Horticulture Educator/Master Gardener Program Coordinator. “Snow cover acts as a blanket to protect our plants from moisture loss and wind burn.”

Annual snow cover is a natural occurrence for Southwest Michigan due to lake effect snow. As cold arctic air from the North moves over warmer water in Lake Michigan, the surface of the lake adds heat and water vapor to the cold air mass. The water vapor condenses to form clouds and snow falls over Southwest Michigan.

When winds are gentle, the snow mainly falls along the shoreline and possibly 8-15 miles inland. When winds are strong, snow fall can reach much farther inland to Wayland, Kalamazoo and Three Rivers. Though the lakes provide the fodder for lake effect snow, the lakes also serve to moderate temperatures along the lake shore. This is one reason for Michigan’s commercial success in growing fruit.

So as our snow fall turns to snow cover this winter keep thinking of its insulating benefits. Snow cover also accentuates the colors and textures of ornamental landscape plants such as red twig and flame dogwoods, river birches, grasses, winterberry and evergreens.

This article was contributed by Carol Bale, a registered member of the Garden Writer’s Association and regional reporter for Chicagoland Gardening Magazine. Carol resides in Portage.